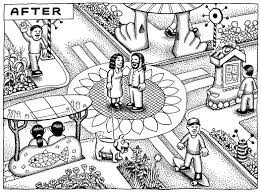 Our very own Lily Wenbao shares her perspective on placemaking in architecture.

To make a place a Place

“…Not every “place” (with a lowercase p) is a “Place” (with a capital P). More specifically, not every “place” in the city is so important to the public health, safety, and welfare that the city wants to spend taxpayer money to create detailed form-based controls that will make the area a memorable “Place.” The fun part of physical planning is helping to design a memorable, notable, beautiful “Place”—a neighborhood, a park, a transit-oriented development, or a mixed-use building—that may actually get built. Maybe you’ll even win an award for it! “Place” makers tend to focus on some of the major elements of urban design… paths, edges, districts, nodes, and landmarks. Those are the kinds of areas that citizens see or visit often and that they can see their mind’s eye when they are somewhere else—locations where good urban design is particularly important because it contributes to the image of the city and to citizens’ ability to understand and enjoy it. When these important locations are attractive, the public fights to preserve them; when they are rundown, the public wants them restored” (36).

One of the most characterizing aspects of the city is the application of the gridiron plan, as evident in the parallel layout of streets in a grid fashion within urban spaces and has been historically used as a tool for efficient expansion of civilizations. The ability for the grid pattern to quite literally stamp out blocks and city features allowed the grid to be comfortably adapted as a template for city planners, and while it made sense for many scenarios, expansion was not its sole strength. There are proven qualities pertaining to the grid, among which are its serviceability regarding simplified navigation and flow of resources, as well as ease of measuring and regulating spaces.

After analyzing the phenomenon of the grid and its spread, geographer Dan Stanislawski challenges this view and credits the grid as “not a placing of buildings merely with the idea of the individual in mind. The concept [is] that of an organic city in which all parts [are] designed to function within the whole.” This conclusion highlights precisely what some people, ranging from the common neighbor to modern activists, find controversial with the gridiron plan. Its continued use today can serve as a method of monitoring and controlling colonial spaces and is argued by some city planners to discourage human interaction through zoning and community expression through its regulations and lack of governmental interest and investment. The grid plan is designed to maximize space for living units, and many times it fails to prioritize the necessity for public gathering places and equitable community representation, leaving many with a lacking sense of unity and empowerment. The challenge for architects and planners, particularly in urban areas, is to design to stay efficient, yet honest to what surrounds the site.

In response, a revolution grows with the aims of transforming public rights of way into spaces that encourage human interaction in the form of placemaking. The intention of placemaking is to provide an opportunity for people to reclaim their spaces through thoughtful representation; and in doing so, to dissolve the lines upheld by the grid that seem to divide communities, without the necessity of having to entirely redraw the city’s planning. To explore placemaking and all of its possibilities, we encourage you to read up on Project for Public Spaces, as well as American Planning Association.

What are its forms?

While the term “placemaking” may be a new term to you, its concept has been ever-present in daily life. To break it down, think to yourself the last time a chalk drawing made you smile; or, on a larger scale, when a local vendor tables at a 5k, all the way to a social movement with protests regarding local issues. In a way, it is exactly localized representation, and it doesn’t have to be a physical form of art. Placemaking is most often any installation or event in a space to say “WE live here” and “THIS is what we’re about here.” It can be deeply personal and revealing about the culture that resides in the area. An added advantage to placemaking is the tendency for people to want to preserve their Places, and thereafter investing in the means to achieve it.

The role of the architect

In architecture, it is the decision to honor the surrounding architecture by not upstaging them or obstructing their views. Decisions regarding color schemes, building elevations, and sometimes naming may also be sensitive to placemaking. They are the decisions that ultimately make a building unique to the area and more socially-conscious.